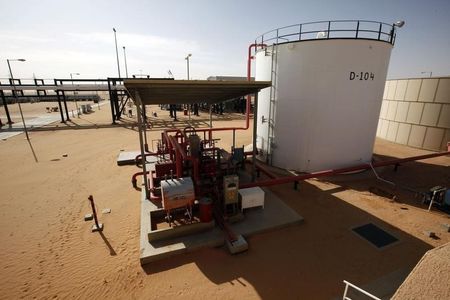 Investing.com – Oil markets lost early gains Friday, turning sharply lower after doubts emerged over the significance of reports that U.S. authorities could be looking at methods of curbing domestic supply.

Oil prices have collapsed about 40% in the last two weeks since talks between the Organization of the Petroleum Exporting Countries and its allies, including Russia, broke down, resulting in Saudi Arabia, the world’s biggest exporter, ramping up supply.

However, a report by The Wall Street Journal suggested that the U.S., the biggest producer, is looking at imposing production quotas on domestic companies for the first time in decades, a move aimed at combating the supply glut.

The U.S. has a history of regulating production through the Texas Railroad Commission back to before World War 2, but abandoned the practice nearly 50 years ago.

Added to this is another WSJ report that the U.S. may lean on Saudi Arabia and Russia to rein in their output, with the threat of sanctions directed at the latter in particular.

“An end of the price war means that both Saudi and Russia would bring back their production levels to where they were prior to the OPEC+ talk in early March,” said ING, in a research report. “Yet this is still questionable.”

“Another key question is whether they have the intention to come back to the table to discuss the previous agenda of further cuts,” ING added.

After all, Bloomberg reported that President Vladimir Putin sees the price war initiated by Saudi Arabia as ‘blackmail’ and is refusing to give in.

On the other side of the equation, demand destruction is only getting worse in the near term, as more and more of Europe and North America goes into lockdown. California, the most populous U.S. state, issued a “stay at home” order to residents on Thursday, Governor Gavin Newsom telling residents they should only leave their homes when necessary during the pandemic. He earlier estimated more than half of the 40 million people in his state would contract the coronavirus in just the next two months.

In addition, Germany’s richest state, Bavaria, extended its prohibition on non-essential activity. Germany’s federal government is expected to tighten its policy on closing non-essential business at the weekend, with the inevitable impact on fuel demand.