Electric bus industry is on the cusp of transforming commercial mobility worldwide, even across countries where sustainable transport solutions are just gaining acceptance. Ongoing concerns regarding global warming and rising CO2 emissions has urged nations to switch to green mobility, sparking the demand for electric vehicles (EVs). Being a sustainable mode of transportation, an electric bus can significantly reduce GHG emissions whilst lowering air and noise pollution. These vehicles are steadily replacing traditional diesel-powered buses, as they are highly efficient and entail lower operating costs.

By switching to e-buses, large organizations can save a fortune in fuel cost as well as on maintenance, since these vehicles have fewer moving parts. A study claims that battery operated electric buses offer between 1.4 to 7.7 times better range in comparison to diesel buses that normally give a range of 4.8 miles per gallon. To take things a step further in terms of driving range, electric bus companies like Ebusco are taking inspiration from the aerospace sector to develop e-buses using components made from composite materials. Use of such materials can help manufacturers build buses that are 33% lighter than steel counterparts whilst providing better insulation. 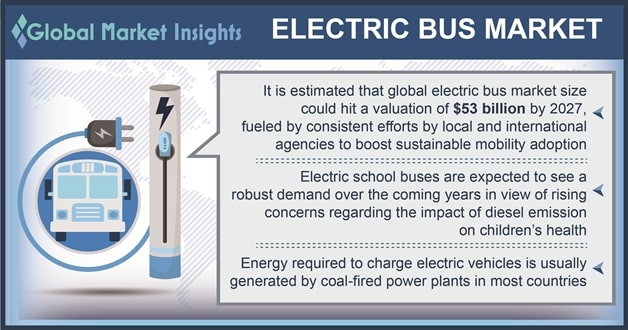 It is estimated that global electric bus market size could hit a valuation of $53 billion by 2027, fueled by consistent efforts by local and international agencies to boost sustainable mobility adoption. A report published by The International Energy Agency (IEA) claims that global EV stock could expand from over 11 million in 2020 to 145 million vehicles by 2030. E-buses could form a significant part of this number, as rise in awareness regarding environmental benefits of electric mobility and supportive government initiatives to tackle climate change will accelerate the electrification of public transportation systems.

Electric buses are the future of public transportation

Although battery-electric buses are superior in many ways against their diesel counterparts, there are certain problems faced by public transportation companies regarding its mass deployment. Issues like shorter driving range of e-buses that lowers possibility for longer commute and lack of adequate charging infrastructure in smaller towns are impeding large-scale deployment of these vehicles to some extent.

However, electric bus market share from public transport segment will be supported by heavy funding form local authorities to back green initiatives and tackle climate change. Highlighting an instance from the U.S., in 2021 the Virginia Department of Environmental Quality awarded a $4.4 million state grant to the Fairfax County to purchase new all-electric buses, trash and recycling trucks to accelerate transportation electrification and combat air pollution.

Similarly, a $4-million grant was awarded to NCTD (North County Transit District) by the California Energy Commission (CEC) to establish a hydrogen fueling station and support up to 50 hydrogen fuel-cell electric buses. It was a major leap towards the district’s goal of switching its overall fleet to zero-emission buses by the year 2042.

Electric school buses are expected to see a robust demand over the coming years in view of rising concerns regarding the impact of diesel emission on children’s health. According to the EIA, more than 25 million children in the U.S. travel to school by bus, with diesel emissions from these vehicles accounting for nearly a quarter of overall emissions from the transportation sector.

By switching to clean fuels and technology for school buses, children can get less exposure to harmful pollutants and attain improved health. Rising uncertainties among school authorities and parents regarding child health and safety could encourage the adoption and demand for electric school buses in the long run. In 2021, North America’s largest student transportation provider, First Student placed its largest order of electric school buses, under which it will purchase 260 all-electric school buses from commercial vehicle manufacturer, Lion Electric Company.

What does the future hold for India electric bus market?

Deployment of electric buses is accelerating at a steady rate in developing economies such as India, as public organizations and consumers are getting aware about the numerous benefits of switching to electric mobility. For example, initiatives taken by the Indian government, like sanctioning of the second phase of ‘FAME’ scheme which entails the deployment of 5,095 electric city buses, fortifies the country’s aim to convert its public transit fleet to EVs.

To boost in-house production of EVs, the government is collaborating with private organizations and OEMs. In 2020, Tata Motors delivered 26 new electric buses to Mumbai’s BEST (Brihanmumbai Electric Supply and Transport), as part of a larger order of 340 electric buses under the government of India’s FAME II initiative. Similarly, electric bus maker, Olectra Greentech along with Evey Trans Private Limited (EVEY) roped in an order for 100 electric buses from the State Transport Corporation (STC) under the FAME-II scheme.

Although the Government of India has laid down policies to deploy 30% EVs by 2030, certain factors like weak financial positions of certain states and over 90% of the buses presently being operated by private organizations could create hurdles with regards to reaching the aforementioned target. However, as a solution, implementation of charging station for electric buses and more people preferring public transportation over private cars and cabs could support India’s transition to electric mobility solutions, expanding the regional electric bus market size over the coming years.

A key challenge to the electric bus industry

Energy required to charge electric vehicles is usually generated by coal-fired power plants in most countries. This practice has raised concerns among environmentalist and consumers regarding the overall environmental benefits of electric mobility. A study conducted by researchers at the Indian Institute of Technology-Bombay (IIT-B) claims that adding electric vehicles in Mumbai Metropolitan Region (MMR), without the integration of sustainable power generation, can push CO2 emissions up by 7-26% through 2050.

Many researchers across other countries are also focusing on the same issue. However, a recent study by universities of Exeter and Cambridge have offered some answers regarding this issue, concluding that use of electric vehicles boils down to lower carbon emissions even if charged using electricity generated from fossil fuels. The study added that driving an electric vehicle serves more environmental benefits than conventional petrol vehicles, and speculates that by 2050, half of cars on the roads could be electric, leading to global reduction in CO2 emissions by up to 1.5 gigatons per year.

As the need for sustainable means of transportation gathers pace globally, electric bus market is poised to become a leading investment area over the next decade. While intracity public and commercial transport emerged as a primary and easier target for e-bus manufacturers, improvement in battery technology and growing access to charging infrastructure could expand the technology adoption across intercity travel. The production and deployment of all-electric buses can be expected to rise at a significant pace across developed regions like North America as well as emerging economies like India. 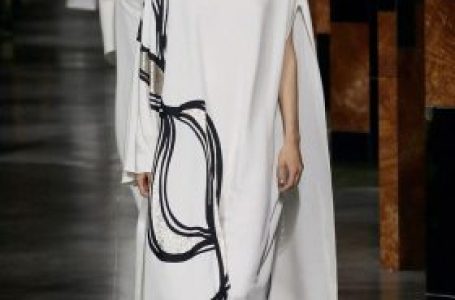